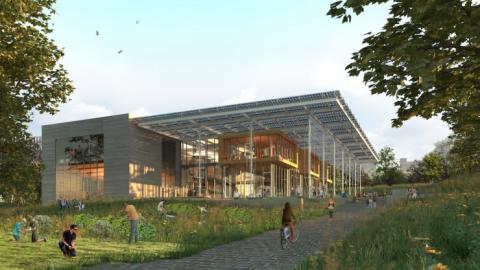 Sustainability and the arts were at the forefront of highlights during the Staff Council’s third Inform Georgia Tech event on Nov. 15. The discussion featured plans for new campus projects and efforts to include students in them.

In an effort to achieve a sustainable campus, he pointed to a number of initiatives the community could see completed within the next three years, including the installation of additional bicycle paths, improved stormwater capture and cistern use for irrigation and drinking, and the transformation of a sector of West Campus into what will be known as the Eco-Commons. The sector will expose natural streams that run throughout campus and provide a viable ecosystem, Wertheimer said. In addition to increasing awareness of urban and ecological overlap, he added that he was excited to see students and faculty use the area as a “living-learning lab” for research.

He encouraged attendees to download the GT Eco-Tour smartphone app to learn about sustainability features across campus.

Another upcoming development, Wertheimer said, may have the campus sharing sustainability tips with the City of Atlanta. In a partnership with The Kendeda Fund – a private philanthropic investor focused on the sustainability of communities – Georgia Tech aims to open doors to a Living Building in 2019. The building has a number of imperatives to meet, including net-positive water use and design that optimizes well-being.

“The symbol for the living building is a flower; it is a metaphor asking, ‘What would nature do?’” Wertheimer said. He noted that students were involved during the time that architecture firms were competing in an ideas competition for how the building should look and function, and some students are even using the challenges of the project in their capstone academic work this semester.

To achieve Living Building Challenge certification, the building must be operated and fully occupied for a minimum of 12 months. If the Living Building opens its doors on schedule, this project could potentially receive its certification in 2020 — aligning with the 50th anniversary of Earth Day. Learn more about the project at livingbuilding.gatech.edu.

The Engineered Biosystems Building, having had its doors opened just over a year ago, is set to receive a mass public art installation at its doorstep. After a national art search, the campus has selected designs and spaces for them around the building, in an effort to “create curiosity” for everyone, said Wertheimer. He pointed to the success of the Pianos for Peace project, the Einstein statue installation, and the Engineered Art sculptures, in exposing a mostly “left-brained” community to creativity and reflection.

“Art can help manage the stress levels of our students,” he said.

He acknowledged that while expansion over the past decade has been reflective of a “robust appetite,” the concentration has shifted to creating experiences for the community. “Our concern is not so much the space between the buildings, but the places between the buildings and the people connecting there,” he said. 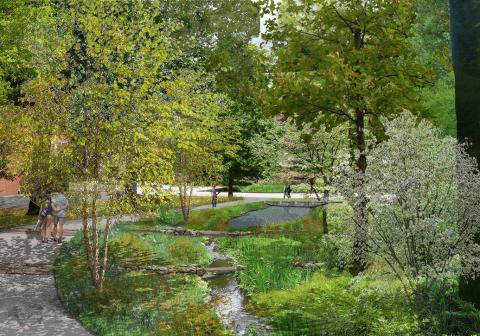